Blind the Eyes is competing in Kindle Scout - Please Vote :) 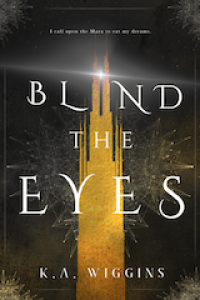 I have a YA dark fantasy debut coming out this summer and it's currently competing in Kindle Scout. If you go to https://kindlescout.amazon.com/p/E9IM6GHX3YIJ and nominate it and it wins, Amazon will send you a free preview copy before it releases to the general public!

So if you're at all interested in the book (or just want to help a newbie out!) please vote. :)

A little more on Kindle Scout:

So if you want a chance to get a free copy of BTE, head on over to the Kindle Scout website, nominate it and hope it wins! And hey, why not vote for some other faves while you’re at it? You get up to three nominations at a time.

A little more about Blind the Eyes:

In a world where hope kills and dreams are deadly, obedience is the only way to survive. But when one girl learns her society's absolute control and guarantee of safety are both illusions, she risks her hard-won status, her home and her life to rebel and expose its lies.

A YA dark fantasy about identity, trauma & taking back your choices. Ghosts and world monsters in post-eco-disaster Vancouver.

From the back cover:

In the Towers of Refuge, regulation dictates every aspect of life.

Haunted 17-year-old Cole would do anything to shake her reputation as a failure. The only way to survive the nightmarish Mara is absolute obedience, and she's down to her last chance.

But when a charismatic stranger shows up claiming to know her and Cole discovers Refuge's absolute control and guarantee of safety are both illusions, she realizes hers isn't the only life at stake and goes on the run.

Cole needs allies to help her expose Refuge's lies and escape execution by nightmare. Too bad the only candidates are a hedonistic rebel, a childish ghost, a stylist with a secret and an imaginary friend with a talent for monster-hunting.

With enforcers in pursuit and the dead invading her dreams, Cole must figure out who to trust and stop the dying before the nightmares eat her alive.

Trusted authorities lie, allies have their own agendas, and even the monsters wear masks in this YA dark fantasy suitable for ages 14 and up. Ebook, audiobook and print editions coming in late spring 2018. Subscribe at https://kaie.space/newsletter for exclusive previews and extended content.