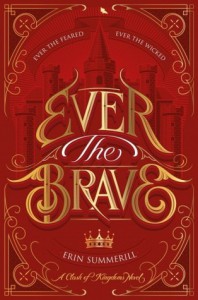 Disclaimer: reviewing an uncorrected proof via NetGalley, so there may be differences from the final version.

Those of you who follow my reviews may remember I was disappointed in Ever the Hunted, the first book in this duology. While I was in love with the cover art, I felt like the story was underwhelming and the language use was odd. But I also like to give debut authors another shot to see how they grow, and since I'd already asked for Ever the Brave on NetGalley, I went ahead and zipped through this draft as well.

I'm happy to say that Ever the Brave does show growth and improvements over Ever the Hunted. In a way, Ever the Brave suffers from being a lot of set up for the series, and Ever the Hunted delivers on more magic and more interesting handling of characters. Maybe I'm acclimating to the unusual language choices or something, but I also felt it read more smoothly. Some nuanced, insightful handlings of the MC, love interest and, in particular, the young king, with regards to relationships with power, politics, belonging and identity. As before, the romance subplot overshadows the greater story to the extent that there's just not the sense of tension I'd like to see. But the romance also felt better developed and more natural than in book 1. Also, the action/fight scenes are some of the book's best writing, with both clarity and tension.

I'd recommend this duology for fans of classic fantasy (Medievalish kingdom setting, elements-based powers, politics/coups and royalty romances) who want to have that itch scratched. The books don't do much that's new, but for a certain audience, they don't need to. It wasn't a right-fit for me, but I'm reading on the upper end of YA, and I think this would do better with younger/newer readers in the genre, maybe teens just graduating from MG fantasy. Only about a 2.5 personally, but I'm bumping the score because it's a pretty well-produced product that may suit other readers much more.