Brilliantly told story of an American boy with high-functioning autism filtering his first love through the lens of a classic French novel. 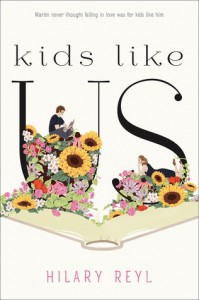 Disclaimers: this book was provided through NetGalley, I'm choosing to leave an unbiased review, and also I know relatively little about autism.

Moving on. I'm not really qualified to comment as to how accurate a depiction this was of a person with autism, but it provided a fascinating perspective on the MC, Martin's life. He goes to a school for kids with neurodivergent/developmental differences/autism...? It's not quite clear, but they seem to have a special program for teaching these kids how to learn and communicate with others more effectively. Martin and a friend from the program both understand the world by comparing people and experiences to a beloved piece of media. In Martin's case, it's a classic French novel. In his friend's, it's the TV show Downton Abbey.

I enjoyed the way Martin was portrayed as deliberately thinking through his surroundings and choosing to respond. It was a bit surprising in the first few pages, but then felt very comfortable and surprisingly relatable. In the story, he's visiting a French town and attending school there on a casual basis while his mother films a movie in town. He struggles with the new situation and new people, but works out relationships mostly by helping others and examining their reactions for insight into why they act a certain way. He enjoys translating for his friends, finding meaning, purpose and acceptance while overcoming anxiety in the act. He struggles, like many children, with his impact on his parent's lives and relationship, feeling guilt for being different and creating conflict and challenges in their lives.

He falls for a local girl who he regards as equivalent to the heroine of his favourite book, and while it takes a while for him to separate his fantasy from reality, he is capable of thinking through the differences and seeing her as unique. In a way, it's a very quiet story about Martin's journey of understanding and relating to the world around him, but satisfying in the way it concludes and entertaining in that the world told in Martin's voice is intricate, interesting and challenging.

A satisfying story that lets you experience the world through a distinctive lens. 4/5 as entertainment, 5/5 as a very well produced book.